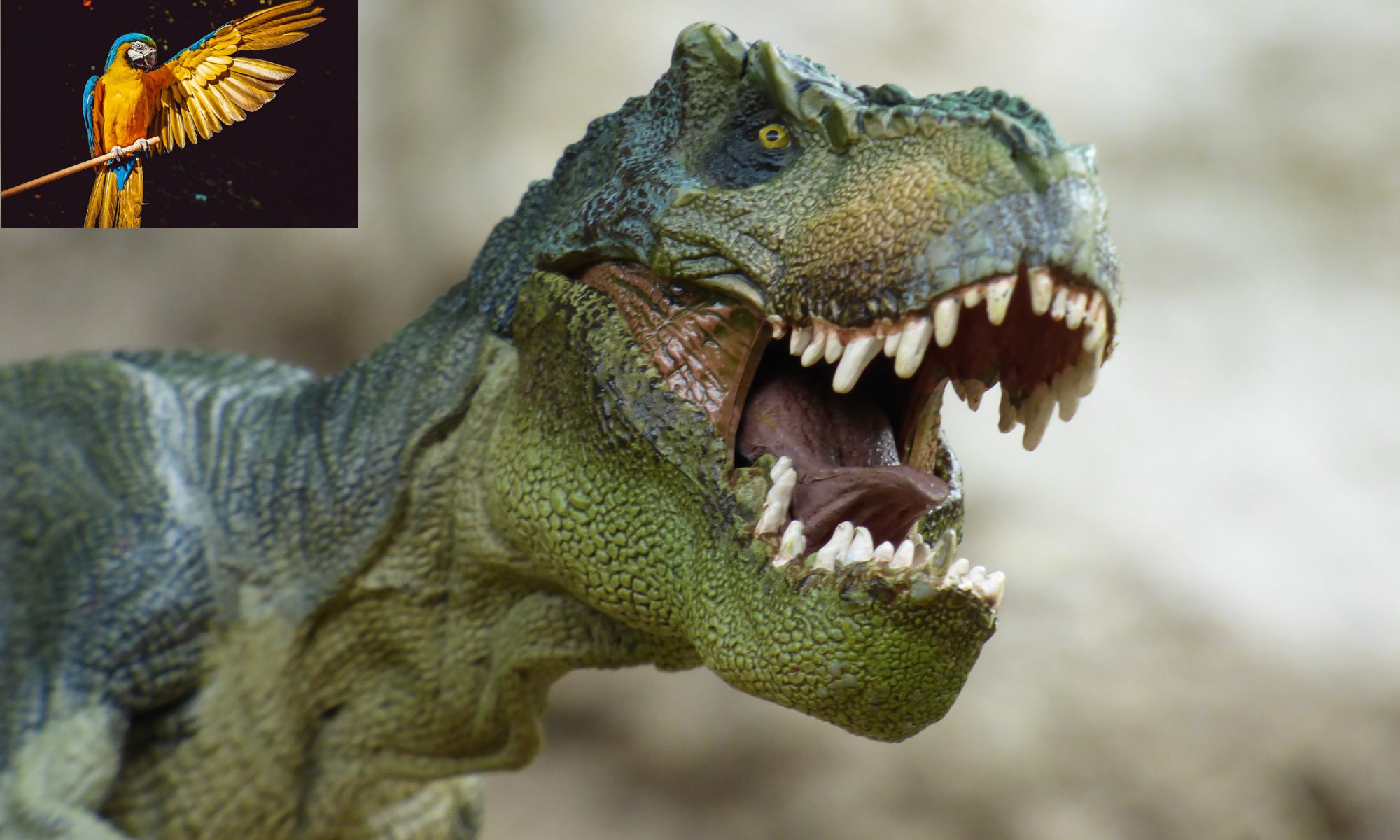 When you’re a robot dinosaur coming off of a twelve-hour shift of patrolling the streets, the last thing you want is to take crap from a parrot, but you put up with it as best you can.

The reason for this is it’s just you and the parrot; everyone else is offline. It seems all of planet Earth is offline. It gives you a lonely feeling. That’s why you’re willing to cut the parrot some slack. It’s just the two of you now.

Stev tromped up the cracked and weed-sprouting asphalt of the driveway, his big metal feet going clomp, clomp, clomp. He clomped into the garage, past the ranks of other robot dinosaurs, all of them frozen in attitudes of attack, or consternation, or repose, all of them offline.

The robot dinosaurs’ metal bodies were painted a variety of colors, depending on their function. The green brontosauruses were groundskeepers in the public parks. The red ankylosauruses were companions for the elderly and the disabled. Nobody messed with them when they were accompanied by a robot dinosaur guardian with a forest of sharp spikes sticking out of its back.

The yellow pterosaurs kept an eye out for the children, soaring gracefully above them as they played in the playing fields or walked to school. The pterosaurs were equipped with lasers, in case anyone tried to harm any of the children. Kidnappings and violent crimes against the young had declined to the point of near-nonexistence after that innovation.

There were lots of robot dinosaurs in the garage, painted many different colors. Stev was a black tyrannosaurus. He was a public safety officer. Since almost everyone and everything had gone offline there wasn’t any crime-fighting for him to do, but he patrolled the streets anyway from 8 a.m. to 8 p.m., his big, taloned metal feet going clomp, clomp, clomp. It was the job he was programmed to do. He had no choice in the matter. He’d keep on doing his job until he went offline, as he surely must someday. He didn’t think he could remain activated forever, could he?

Pretzel the African Gray parrot considered Stev from her perch, her head cocked to one side, regarding him with one silvery eye.

Stev went over to a fifty-pound burlap bag of birdseed and scooped some out. The bag was almost empty.

“No more nuts. We’re all out,” he told Pretzel, pouring seeds in her dish. “Have some of these.”

“There are no more nuts. Sorry,” Stev said.

He went over to the sink and filled Pretzel’s water dish. At least the water was still running. That was good.

Stev reached out a talon and stroked her head. Pretzel’s eyes closed blissfully.

“I love you, you big booger,” Pretzel told him in her rusty little voice.

“I love you,” Stev told her, gently running a talon along the grey feathers on her back. He was careful when he handled her. She was so tiny, compared to his metal bulk.

Molly was a technician. She maintained all the robot dinosaurs in the garage, or at least she had until she went offline. That had been… Stev paused to calculate… 728 days, 14 hours and thirty-six minutes ago.

Pretzel shook herself, the red feather in her tail tapping against her wooden perch.

“I wanna see Molly. Pretty Molly! Where are you, pretty Molly?” she trilled.

Stev sighed. “All right, but just for a minute.”

Pretzel hopped onto his shoulder. The robot dinosaurs were much smaller than the real dinosaurs had been. Stev was nine feet tall from his metal feet to the top of his metal head. That was large enough for the purpose of his designer, who, like every other human on Earth, had gone offline.

Stev walked to the back of the garage, his big metal feet clomp, clomp, clomping against the cement floor. It was quiet in the garage. The TV used to be on all the time, giving the news, but it had eventually gone offline too. The last news had been about something called floo. The TV people called it a pandemic.

Floo and pandemic were not words in Stev’s data base. He therefore didn’t know what they meant, but whatever they meant it made the TV people unhappy. Some of them had cried as they talked about it.

He opened the door to the back room, where Molly lay on a cot. She was on her side, her knees bent, her brown hair fanned out on the pillow under her head. Her eyes were closed. Her skin had changed color in the dry desert air. It had turned leathery and shrunk against the bones that made up her framework. Molly was offline.

“Pretty Molly! Hello, pretty Molly,” Pretzel crooned. She hopped down onto the cot and pressed her beak against Molly’s cheek. When Molly failed to respond she patted her gently with one grey wing and then fluttered up to Stev’s shoulder. She settled herself against him, holding on with her reptilian feet.

“That’s right. Let’s go back in the other room,” Stev told her.

“Have a nut?” Pretzel asked hopefully.

“There are no more nuts,” he said.

Turning to the corpse on the cot she said, “Goodnight, pretty Molly.”

Jill Hand is a member of the Horror Writers Association. Her work has appeared in dozens of publications and in many anthologies, including Test Patterns, Mrs. Rochester’s Attic, Stories From the Near-Future and Postcards From the Void. Her new novel, “White Oaks” is being released May 30, 2019.