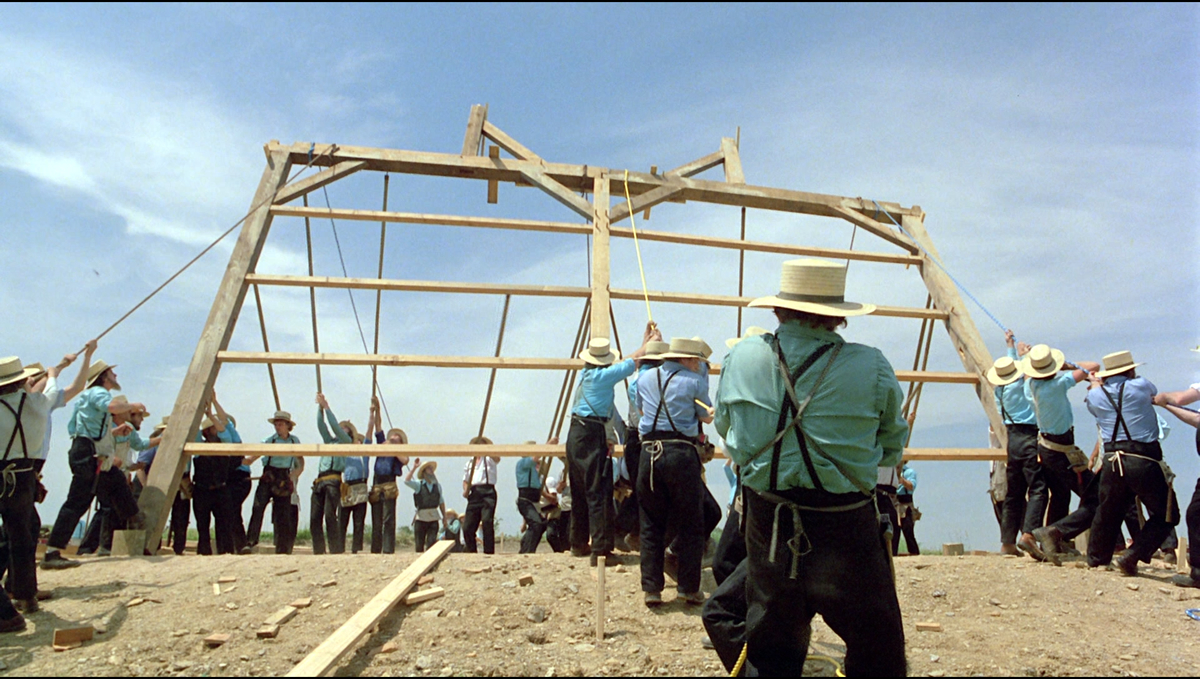 “We’re here for the barn raising.”

The big raw-boned farmer, dressed incongruously like an Amish field hand only with bright pink headphones, waved his hand dismissively. “Everybody needs a barn.”

“But we already have a barn,” Bob said, pointing to the old grey structure a hundred yards away.

Another dismissive wave. “Feh. You call that a barn?”

Carol stepped up to join Bob at the door. “What’s going on?”

Bob started to speak but the farmer cut him off. “Enough! Got a barn to raise.”

Now for the first time Bob and Carol noticed the mass of farmers and workers, male and female, young and old, on their front lawn. They had come in flat bed trucks, in hay wagons, in pick-ups, in rusty old hippie vans. Several helped unload a large pile of gleaming white pine lumber.

The Amish farmer stepped off the porch to organize his co-raisers of barns.

Carol turned to Bob. “What are we going to do?”

“I don’t know, honey. Call the sheriff, I suppose.”

The sheriff arrived about the time the farmer and his co-raisers finished the frame of the first wall. “Howdy! How can I help you folks?”

“’Raising a barn’ is how we say it ‘round here. Yessir, I can see that. Mighty fine barn it’s gonna be, too, once they get it finished.”

“But we didn’t ask them to build a barn.”

“Well, that’s the nice thing ‘bout folks in these here parts. You don’t hafta ask ‘em nothing, they’ll just see a need and go out and do it. Right nice of them. Real friendly folk.”

The sheriff peered at the dilapidated old structure, then turned back to Bob and Carol, a little less friendly this time. “Yes, ma’am, I see it. Not much of a barn, is it? I reckon if I were to call my cousin the county agricultural agent, she’d condemn it on sight.”

“We were told this property met all structural requirements when we bought it.”

Carol started to speak again but the sheriff cut her off, his former friendliness returning. “Thing is, these folks just want to help, show you some kindness. It would be a mite rude to refuse ‘em.”

Carol and Bob hesitated, looking at each other.

“You folks come from the city,” the sheriff said. “Bought this place as a country home, you’ll commute to work, right?”

“I thought so. Well, these folks, they’re trying as best they can to make you feel welcome, part of the community. You can understand that, right?”

“There ya go, we’re half way to understanding one another already. Barn raising is what these folks do to welcome people into their community.”

“They’ll be expecting you to lay out a bit of a spread for them. Food. Lunch, at the very least maybe some snacks on the side.”

The sheriff peered at the busily laboring barn raisers. “I don’t see any water for ‘em, much less any ice cold lemonade.” Less friendly now. “You wouldn’t want these folks working so hard on a hot day like this without offering them any lemonade, would you?”

Bob and Carol looked at each other again. “Well, I’ve got some instant lemonade mix,” said Carol. “I suppose I could make some for them.”

“Ain’t you got any fresh lemons?” the sheriff asked, belatedly adding: “Ma’am.”

Bob shifted uncomfortably; he did not like the way this was going but saw no way of avoiding it without causing more problems.

“I suppose I could run down to the store, get a couple of bags of fresh lemons — “

“You’ll need at least four,” said the sheriff. “Five, just to make sure.”

Carol said, “And some fruit and pastries — donuts should do — and if they have any roasted chicken buy seven or eight — “

Carol went back into the house leaving Bob alone with the sheriff. Bob smiled weakly, spreading his hands as if in submission. The sheriff smiled broadly. “I can see you folks are gonna fit right in.”

Bob returned and they laid out a spread using sawhorses and wooden planks as tables.

The barn stood half-finished, and as soon as the raisers polished off their lunch, they resumed work. By late afternoon they finished raising the barn, and Bob and Carol had to admit it was much better than the old barn that came with the property.

The barn raisers packed their tools, those who wore hats tipped them, and departed; Carol and Bob thanked them profusely as they left.

Before climbing into his battered old flat bed truck, the atypical Amish farmer said to them, “The donuts was nice but next time see if you can get the kind with pink icing.” Then he climbed in his truck and drove off.

Carol and Bob looked at each other in befuddlement. “’Next time’?”

Then they laughed, shaking their heads at the quaint country ways of their new neighbors.

The knock at the front door came just after dawn. Pulling a robe around him, Bob answered it.

The Amish farmer stood on his porch. “Barn raising.”

Bob blinked in surprise. “You just built a barn for us yesterday. Raised a barn,” he said, correcting himself.

“Raising another,” said the farmer. He turned and whistled and a crew of barn raisers, much larger than the previous day’s crew, swarmed onto the property.

Another phone call to the sheriff. This time he appeared a mite peeved. “What is it? I’ve got better things to do than babysit a couple of new comers.”

“But this is our property,” said Bob.

“Then what’re you beefing for? These folks are just trying to be helpful — “

“We didn’t need a new barn in the first place,” said Bob, “much less two.”

The sheriff’s eyes narrowed. “Sounds to me like we got a pair of ungrateful city folks here.”

“Why don’t you learn to be a little more trusting of your neighbors, let them decide what you need or don’t need. They know these parts better than you.”

Bob could sense the hostility lurking shark-like just below the surface of the sheriff’s words.

As the barn raisers drove off, Carol said, “What do we need two barns for?”

And the next day: “What do we need three barns for?”

And the day after that: “What do we need four barns for?”

And it wasn’t just the food for an ever increasing number of barn raisers (gluten free / peanut free / organic / vegan / kosher sub-menus provided). The sheriff made some pointed comments on the day of the fourth barn raising about folks having to stand up and eat, not have a proper sit down meal at proper tables. So Bob rented chairs and tables.

And rented them again on the next day.

And again on the sixth day.

And bought them outright on the seventh day.

By then Carol and Bob were feeding barn raisers in two shifts, their number increasing with each new barn.

And the barns themselves started to become more ornate, more elaborate.

Cupolas began appearing on the eighth barn, and the barns’ meandering side sheds spread out vastly over the farm, crowding out the landscape. By the eleventh day, the cupolas evolved into ornate and intricate spires rising over the barns, requiring whole new teams of specialists to execute them.

They tore down the old original barn, replacing it with a phalanx of porta-potties; Carol found herself cleaning them whenever not making lemonade or setting out the lunches.

On the night of the fifteenth barn, he said, “We just can’t keep this up. Our bank account is nearly exhausted, our credit cards are maxed out.”

“They must want us out and this is their passive aggressive way of doing it.”

They knew they were beaten. They called their real estate agent that night and the next day, between cleaning porta-potties and laying out food for six shifts of workers, they sealed a deal to let the agent sell the property at a loss.

After the barn raisers left that evening, a moving van came, loaded up Bob and Carol’s personal possessions, and took them to a storage facility.

Luckily one of Carol’s friends in the city was vacationing with her family for the summer and let Bob and Carol stay at her apartment while they looked for a new place of their own.

“I guess we weren’t cut out for country life,” Bob said as they turned in for the night.

“I guess not,” said Carol, thinking about all the money they’d spent and lost, money that meant to have gone towards a nice home for their future.

Early the next morning there was a knock at the door of their borrowed apartment. Bob answered it, assuming it was a neighbor who didn’t know their hosts were away.

The Amish farmer with the pink headphones stood in the high rise’s hallway.

A long time writer in TV, films, graphic novels, comic books, video games, short stories, and novels for the YA market, Buzz Dixon’s credits include such animation classics as Thundarr The Barbarian, G.I. Joe, Transformers, Jem, Batman, and Tiny Toons; the films Dark Planet and G.I. Joe: The Movie; creating the Christian manga category with his hit Serenity graphic novel series; work for Disney and Marvel Comics, the Terminator 3 video game among others; and short fiction published in Mike Shayne’s Mystery Magazine, National Lampoon, the Pan Book Of Horror Stories, and Analog.  His new YA adventure novel, Poor Banished Children Of Eve, will be published shortly.  A husband, father, grandfather, and litter box cleaner for a cranky old cat he inherited, Dixon can be found on his blog http://www.BuzzDixon.com, Facebook, Instagram, and Twitter.